For teacher notes for The Way of the Weedy Seadragon, 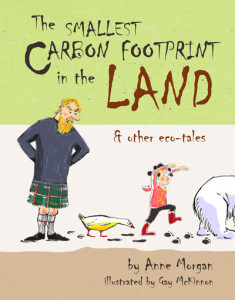 “This is the most entertaining collection of recycled fairy tales I have read in centuries.” – Betty Fairweather, manager of the Fairy Godmother Op Shop.

The Smallest Carbon Footprint in the Land

A prince who is potty about gardening wants to marry the young woman with the smallest carbon footprint in the land. And that footprint just happens to belong to Cindy because her op shop slippers are made from diamond (a form of carbon) and her step family won’t let her go anywhere.

Messy Lox Flies to the Planet of the Bears

A poor fisherman named Gus pulls up a bottle in his fishing net. When he takes out the stopper he discovers, out blings a genie named Bling, who promises to fulfil his every wish. But what Gus does not know is that as he becomes richer, bling dust will kill off the birds and fish of the ocean.

Little Emerald Ryding-Hoode sets off through the forest carrying a basket of muffins for Grandma. On the way an endangered wolf steals a muffin and runs away. Then Little Em meets her cousin, Little Ruby, who claims that the wolf has eaten grandma and dressed in her clothes. Finding this impossible to believe, Little Em continues to grandma’s cottage and arrives there just in time to save her uncle from killing the wolf, which Grandma has been protecting.

Juzzy and the Giant Pumpkins

Juzzy and his widowed mother are so poor they would starve if it weren’t for Clarissa, their milking cow. When Juzzy’s mother becomes sick, Juzzy is too lazy to milk Clarissa, and her milk dries up. On the way to the market to sell Clarissa, Juzzy meets Jack and trades her for some giant beans. Juzzy climbs the magic beanstalk and meets a very tall man named Gordon, who is heartily sick of boys climbing the beanstalk and trying to steal things from his organic farm in the clouds.

Princess Priscilla wants the palace gardener to poison some bulrushes in an ornamental frog pond. He does so, reluctantly, and then resigns. When Priscilla drops her golden ball in the pond she makes a bargain that anyone who will retrieve her ball from the poisoned pond can be her friend and live with her in the castle forever. A very sick frog prince pushes her ball out of the pond. That night, she turns into a frog princess herself, and discovers how terrible it is to live in the poisoned pond before she agrees to marry the frog prince and live happily ever after.

Cool Girl and the Sensational Seven

Cool Girl runs away from Queen Beatrix, her wicked stepmother and seeks shelter on a sustainable farm in the Lanternlight Forest. This farm is run by seven short, but very talented brothers. Cool girl has such a great time learning how to grow and preserve produce, and cooking it, as well as singing along to the brothers’ band. Prince Percy rescues her from Queen Beatrix, who tries to kill her with a poisoned apple, but Cool Girl decides that instead of marrying a prince, she wants to keep singing with the Sensational Seven.

Chicken Licken is splashed by a wave and decides the sea level is rising. He sounds the alarm, and he and his mother, Henny Penny, and his fine feathered friends go to visit Farmer King to find out what is making the sea rise, and if they can stop it from rising any further. 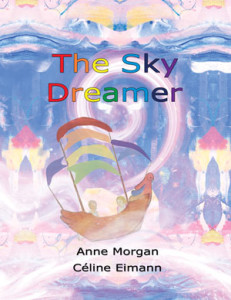 A free pdf of classroom activities for The Sky Dreamer can be downloaded from the publisher’s website (IP Kidz).

“In a very sensitive and gentle way, this book invites the reader to experience the journey of a child coping with grief after the death of a sibling. On the night before Liam’s birthday he experiences a dream connection with his sister, Cassie as she arrives in her boat the Sky Dreamer, floating just outside his window above a silver ghost gum. Cassie welcomes her brother aboard and off they sail into many adventures while Cassie sews her brother a birthday present. As they journey through the sky, Cassie encourages Liam to learn to sail the Sky Dreamer by himself through the many hazards of thunder, lightning, meteorites, past distant planets and comets. Gradually he gains confidence to steer on his own and all the while his sister sews his birthday present. As daylight appears, Liam leaves the Sky Dreamer with his special birthday present, which will brighten his life. Liam’s journey with Cassie in the Sky Dreamer is a beautiful analogy of a child’s journey through the grey times of the grief to very gradually learning to live without a sibling and once again experience the sunny, happy times. The dreamlike quality and changing colours of the beautiful illustrations reflect the emotions that Liam experiences as he learns to steer the Sky Dreamer. His stark, grey world of grief is mirrored in the grey tones of the background as he stares at the cloud formations in the sky. This contrasts with the changing colours in illustrations throughout the narrative, ending with the sunny colours of the final illustration. This beautiful book very gently explores the process of loss and healing and would be very comforting to share with a child going through this process.” – Margaret Warner, Buzz Words.

The Clawbeak  books are funny, pacy adventure stories for children aged 5-12. With a treasure trove of illustrations by Wayne Harris, Clawbeak has been known to capture and hold to ransom the imagination of even the most reluctant of readers. Even a shipload of bloodthirsty, octogenarian pirates have been known to trade in their rusty cutlasses for library cards after getting hooked (?!) on reading by the Clawbeak books. The Clawbeak books build on the adventure stories of yore in a way that will appeal to today’s beginning readers and inspire them to embark on a lifetime of reading adventures. They also provide fertile ground for the development of inter-disciplinary classroom activities in literacy, numeracy, society and environment, science, technology, visual arts and crafts, music, health and physical education, dance and drama.

Captain Clawbeak: The One and Only 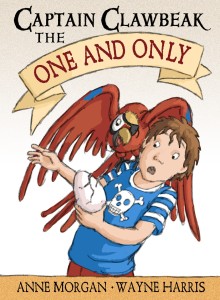 “Perhaps you’ve already met Captain Clawbeak, the loud-mouthed salty macaw, in Anne Morgan’s previous book ‘Captain Clawbeak and the Red Herring’ in which the irascible pirate bird adopts Jack’s family (Dad the home-maker/pirate ship builder and vet Mum) and then wreaks his own particular brand of havoc. In this, the second in the series, Jack is horrified to learn he is to become a big brother. He knows about the problems caused by baby siblings from his best friend Joey who has a lot of them. (‘Babies are yuk!’) And indeed things are different. Mum and Dad, busy with preparations for the birth (rather than the berth!) don’t seem to have the time for him. Even Captain Clawbeak’s got all broody. Loud-mouth salty macaws, however, are extremely rare and Jack’s bird may possibly the last of the species. In his desperation to be a father, Captain Clawbeak brings home and egg. It hatches into a crocodile, Whippersnapper. Jack knows they can’t keep it and he has the problem of trying to find a home for it. Problems galore ensue from the baby croc biting Jack’s teacher on the rear end, to Big Bertha, the mother croc, charging Jack and the zoo’s education officer. Happily, it all ends up well. There’s even another loud-mouthed salty macaw and it is love at first sight, ahhh! Anne Morgan is a very good writer who knows how to hold a young reader. She provides lots of fun and fast-paced action, along with thoughtful doses of familiar family angst. Her clear, clever prose is stronger supported by the humorous illustrations of the ever-excellent Wayne Harris. Aimed at a middle-primary audience, there’s plenty to offer the hammy teacher who like to “Argh-argh” while reading aloud to a class, though the book(s) also work well as read-alones. There’ll be the pleasant hum of laughter from the beanbags in your book corner. Morgan is developing into an Australian version of Margaret Mahey and I look forward to the next installment when babies, human and macaw, will be sure to create further disruption to Jack’s life. ‘Captain Clawbeak: The One and Only‘ is a little gem and if you haven’t already unearthed it, go panning at your local bookstore soon.”

Using the Clawbeak books in your classroom

The pirate theme works brilliantly with primary school children from grades 1-5, and teachers can find a wealth of piratey ideas and teaching resources elsewhere on the web. Here are two literacy-based classroom activities.