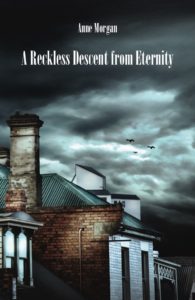 Anne Morgan has one full-length collection of verse, A Reckless Descent from Eternity (2009), published by Ginninderra Press, Port Adelaide.

Anne has won many poetry awards in Fellowship of Australian Writers Tasmania competitions and has been published in Best Australian Poems, 2010, and other Australian anthologies, and has been Highly Commended in Island Magazine’s Gwen Harwood Poetry Award (2006).

She has also been published in Antipodes, 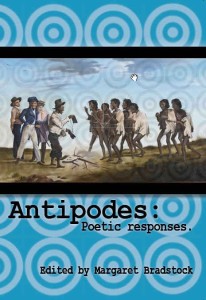 a collection of poetic responses to the European invasion of Australia.

Anne is currently working on a collection of raps for kids about freshwater creatures. Here is the

Axolotl Rap
Come and rap with me, the amazing axolotl,

we can rap a little or rap A LOTTLE!

I’m the larval stage of a salamander,

but I don’t want to change and climb on your veranda,

for I’m telling you now, with no ifs or maybes,

we need no adult form for us to have babies.

We have gills and six tentacles which waft around our head,

our tentacles have tentacles, purple, brown or pink or red.

We have a broad head, four legs and a tail

and a superpower that’s been rarely known to fail,

we can grow that bit again and set ourselves right.

I’m not just a smiley face and a four-footed dancer,

for my superpower of regeneration

could help humans grow back limbs after amputation.

Come and rap with me, the amazing axolotl,

we can rap it slowly or go FULL THROTTLE!

Let me tell you one thing that really gets me riled,

axolotls are nearly extinct in the wild.

We come from the lakes of central Mexico,

but home to those lakes we cannot go,

>for you humans have made an unwelcome contribution

to our near extinction through expansion and pollution,

Won’t you fish those monsters out and put them on a dish?

>Come and rap with me, the amazing axolotl,

we can rap a little or rap A LOTTLE!

People may need permits to keep me in Australia

to prevent yet another ecological failure.

Setting me free would earn you no praise

for I’d endanger native critters in your waterways

like tilapia and carp, I’d drive others to extinction.

Come an rap with me, the amazing axolotl,

we can rap it slowly or go FULL THROTTLE

I’ll stay safe in a tank, but don’t put me in a bottle,

Anne was the poetry editor of Birdsong, a celebration of Bruny Island birds.  This collection of poetry, essays and artworks, published in 2014. Here is one of Anne’s poems from the collection.

I still my paddle blades

to approach a flotilla of swans

and an Oxbridge syllogism

All swans are white,

these birds are swans,

these swans, therefore, are white.

The black feathers which float before me

flout the northern premise of the dons.

I hunch to glide beneath a bridge’s concrete pillars.

Dodging fishing lines,  my thoughts reel in platelets of a time

which bleeds down from Mount Cook and Mount Mangana:

water from this creek, ringing the woods with iron axes,

and the Nuenone standing witness to a singular event

which turned antipodean logic on its head:

All men are black

these strangers are men,

these men, therefore, are …

Pink, puce and blue as sunset?

Children splash and squeal in the curling fringe of ocean,

blessed and cursed with scant rememberings of Truganini

trundle the creek mouth in a gawky lift off to an airborne arrowing,

then they dip and settle, feather-soft yet wary,

further out upon the sun-shocked bay.

Read more of Anne’s poems on The Write Stuff Showcase of Tasmanian Poetry.